How to Change Your Name After Marriage

Follow these steps for changing your name after marriage, and you'll have it done in no time!

Step 1 - Decide What Your New Married Name Will Be

Hyphenating your last names is a growing trend among modern couples. The name pairs are often hyphenated (Smith-Jones, Smith-Johnson, and so forth). Approximately 5% of couples do this to create a new family surname.

Similar to hyphenating, you can double barrel names by adding the last name to the first name (Smith Jones). This is actually becoming less common, and being replaced with the next option...

Lots of newlyweds are moving to a new trend of making their maiden name their middle name, and their spouse's name their last name. So for example, Jane Anne Jones becomes Jane Jones Smith, where Jones is now their middle name. While it reads a bit like a double barrelled name, this subtle difference actually makes a big difference when it comes to filling out forms and dealing with organisations over the phone where it is often easier to communicate a simple last name. It combines the best of both worlds and allows newlyweds to retain their maiden name, but also take on their spouse's name, and the best bit is it is completely legal and easy to do.

Another option is to make up a totally new name. The sky is the limit here and you can choose anything you like, from a combination of names to something completely new. It's perfectly legal and you can both use this name if you like.

There are actually lots of different ways you can change or you, read more about your name change options here. 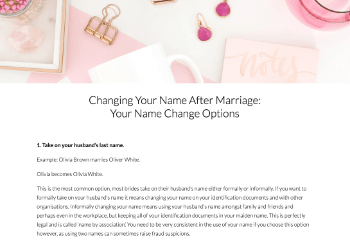 Our webpage above will tell you all about your name change options after marriage.

Keep in mind that the marriage name change process will likely be different depending on what you choose as your new name, with taking on your spouse's name thought of by most as the easiest option.

NB: If you are taking on your spouse's name but only in certain situations, such as only among family and friends, you don't have to make your new name legal. It is perfectly ok to use your husband or wife's name socially without changing your official ID documents and this is called "name by association". If this is what you choose to do, you can stop right here and you don't have to follow any of the further steps!
If you are wanting to change your name on your ID and with organisations... read on!

The evidence you need depends on what you change your name to and the kind of name change process you go through. This will be different, for example, if you take on your husband's name or if you make up a new name. Despite popular belief, the 'certificate' that your marriage celebrant gives you on your wedding day is not enough. This is a commemorative certificate only and won't be accepted as it is not an official document. Your "official" certificate comes from the Registry of Births Deaths and Marriages once your marriage celebrant has registered your marriage. 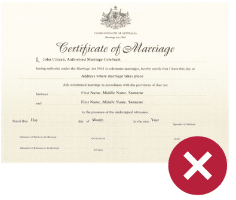 Above is an example from the NSW Registry of Births Deaths and Marriages of a registered marriage certificate and a commemorative certificate (not acceptable to most organisations as "official" documentation).

Once you have your certificate, all you need to do is show it to organisations and ask them to change your name. Some organisations also have forms they will need you to fill in for their own record keeping purposes.

If you are changing your name to something other than your spouse's name you can't use your marriage certificate as evidence of your change of name and you will need an official name change certificate instead. This is a different process.

Step 3 - Change Your Name With Organisations

This is the tedious part! The average Australian bride will change her name with 55 organisations (not counting social media).

The best thing to do first is to make a list of everywhere you need to change your name, and then investigate how to change your name with each place. Some will be easy and straight-forward, and some will make you jump through hoops.

The most common places you will need to change your name include your passport, your drivers license and registration, bank accounts, the Australian Taxation Office, Medicare, insurance policies, superannuation, your will (in most cases your marriage will cancel any previously written wills), the Australian Electoral Commission and all of your subscriptions and memberships. As stated above, this adds up to around 55 organisations for most brides (and/or grooms).

We here at After The Wedding recommend starting with your drivers license and then moving onto banks and financial institutions, if you have our name change kit the reason for this is spelled out and it makes total sense. 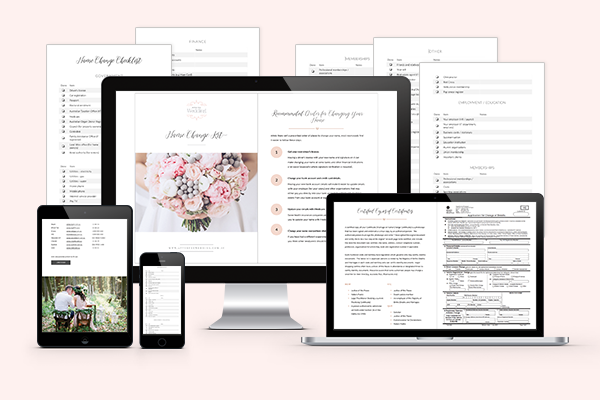 Top Tips for Changing Your Name After Marriage

Tip 1:  Practice your new signature before you start your name change process. Practice it A LOT.

Tip 2:  Keep copies of everything. This includes a photocopy (or photo) of your drivers license, passport etc before you go to get your name changed, as you will have to hand in your original.

Tip 3:  Be diligent in keeping records of where you have changed your name and what is still left to go.

Tip 4:  Do it all as quickly as possible. There's nothing worse than being known by one name somewhere, and one name somewhere else, especially if you can't remember where you're up to in your name change process.

Use a Name Change Kit to Make it Easy & Straight-Forward 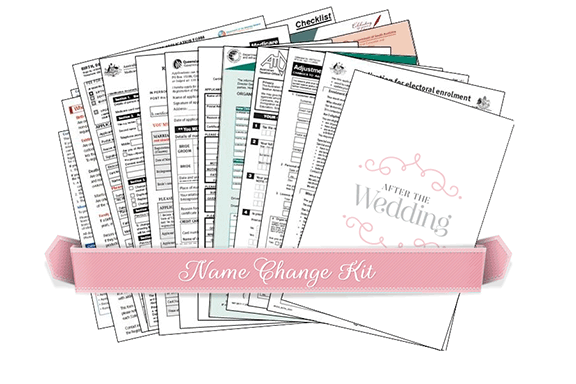 A name change kit will lead you through the steps of changing your name, providing you with all the forms and online links you need, making sure you get it done as quick as a flash without missing anyone.

More Help Changing Your Name After Your Wedding

Usually the first place people change their name after getting married. Don't forget to change your married status as well! How to change your name on facebook.

Things no one tells you about changing your name.

What to change your name to, when to do it, and slip ups that new brides and grooms make when changing their name. Read more about changing your name.

Changing Your Name After Marriage in the USA

This website is for Australian brides and grooms, but if you're from the USA you can read our article here about changing your name after marriage in the USA.

Let's get organised! Here is your post wedding checklist to help you with all of those extra tasks after your wedding.

Do you even have a Will? Most people put it off because it seems daunting, but it's really not that difficult and a Will Kit can make it quick and easy.

Fun Things to do After Your Wedding

Sad that it's all over? It doesn't have to be! Can you keep creating memories after your wedding.

I've listed the modern and traditional gifts, colours, stones and flowers here for your first anniversary through to your 50th. Anniversary Gifts Colours, Stones and Flowers

Copyright 2021 After the Wedding. All Rights Reserved.